Posted on February 1, 2014 by pokypedalingstevenspoint

Almost 4 months have passed since the final Poky Pedal of 2013. Although snow continues to pile up and frequent subzero temperatures leave little doubt that it’s still winter out there, anticipation of another season of Bike Fun builds. 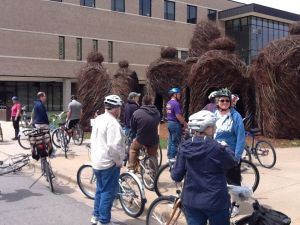 There will be lots more Bike Fun to share in 2014

The unveiling of the 2014 Bike Fun Calendar will occur in early April, the first Poky Pedal will take place in mid-May, and Bike Fun will continue into October. I’m pretty excited about all the Bike Fun we can look forward to sharing.  I’m not going to reveal much before April, but I will mention that PPSP will be expanding the number of Poky Pedals from 10 last year to 14 this year. The Stevens Point area will be bursting with more Bike Fun than ever soon after the snow melts away.

In the meantime, it has been a busy late fall and winter at PPSP. Regular readers probably realize that it has been a while since I’ve written about Bike Fun. Since my report on the Maple Ride in early October, I have written 22 (!) blog posts. This reflects the substantial amount of local bikey news that has taken place since then. Topics I have covered include the following:

During this same period, I have raised awareness about bicycling in our local newspapers via two guest columns plus a few letters to the editor. I have twice given oral presentations to Stevens Point Common Council in order to educate our city leaders about bicycling. I have written three letters of comment to the staff of the Division/Church project making suggestions for better bicycle accommodations within their design alternatives.

Bike Fun is at the core of why I put so much energy into writing and speaking about these topics. The better our city and region is for bicycling, the more Poky Pedalers can enjoy all the Bike Fun to come.

Although these topics have filled the front page of PPSP for several months, that doesn’t mean that preparations for upcoming Bike Fun has been neglected. I assure Poky Pedalers that Bike Fun planning has been actively taking place and progress is right on schedule.

There will continue to be bikey news to cover as 2014 continues. For the county bike/ped plan, the final plan document should be released this month, after which efforts towards implementation can begin. The Division/Church project seems to have temporarily stalled, but it is certain to move forward again soon with significant focus on bicycle accommodations in the updated designs. As other newsworthy events about bicycling occur in the Stevens Point area, Poky Pedalers can feel confident that the PPSP blog will keep you informed.

But all this is for another time. For now, let’s simply focus on the Poky Pedals that lie just beyond the snowbanks. Bike Fun will be here before you know it, and I eagerly look forward to sharing it with all Poky Pedalers.