Posted on July 23, 2014 by pokypedalingstevenspoint

A couple of days ago, I rode to the east edge of the urban area to see what was happening with County Hwy R. This roadway, which borders the east edge of Crossroads Commons, was closed for construction between Crossroads Commons (just south of Hwy HH) and Porter Dr for the past few months. The road is now open to travel, and some nice new bicycle infrastructure is available along this corridor. 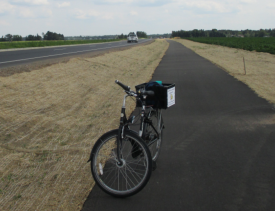 Prior to the construction, a non-motorized sidepath along Hwy R was available on the west side of the road between Old Hwy 18 and Crossroads Commons. This path provides good bicycle access to the stores within Crossroads Commons. I wrote about such good access in this blog post from a couple of years ago.

There had also been stubs of bike lanes installed through the Hwy HH intersection during a reconstruction of that intersection a few years back.

The just-completed construction now extends both the non-motorized sidepath and the bike lanes all the way south to just beyond the Porter Dr intersection. This new bicycle infrastructure provides some great additional options for travelling around that area by bicycle because of the new connection to Porter Dr. 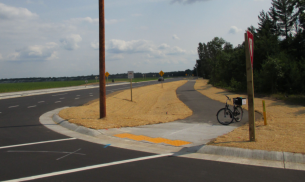 The sidepath continues past the intersection of Hwy R with Porter Dr. Here’s the south-facing view from that intersection.

Porter Dr between Hwy R and Hoover Ave to the west has a shoulder of suitable width for bicycling. A notable hill for traveling over I-39 is part of this segment. The speed limit in this stretch is 25 MPH – and I have seen police enforcement of the speed limit there – so that this shoulder is comfortable to bicycle on for many, perhaps most, people. (A 2-foot no-drive buffer would probably make it comfortable for a large majority of those riding bicycles.) I don’t ride this stretch often, but those times I have ridden it I found the shoulder in good shape with minimal debris.

With the extension of the sidepath, a terrific 6.1-mile loop entirely on non-motorized paths, bike lanes, and shoulders becomes available. From the intersection of Hoover Ave and Joerns Dr, the clockwise loop is as follows: 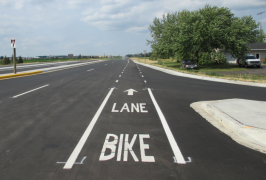 For those who bicycle faster than would be appropriate for a non-motorized path, the new bike lanes on Hwy R are also an outstanding addition. Hwy R south of Hwy HH had been a narrow two-lane road with no paved shoulders. Moderately busy fast-moving traffic made this an unpleasant option for bicycling. The new bike lanes now create a dedicated on-road bicycling space apart from the standard travel lanes. This is a substantial improvement.

The new non-motorized path and bike lanes extend about a quarter-mile south of Porter Dr. This is far enough to connect to Pinewood Dr, providing a new quality outlet for people bicycling out of the isolated neighborhood just south of Porter Dr and east of I-39. 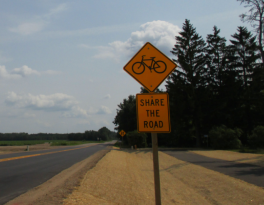 The new non-motorized sidepath and bike lanes abruptly end. This sign alerts people driving to expect bicycles to be occupying the lane.

Sadly, the non-motorized path and bike lanes abruptly end just south of there, where Hwy R remains a two-lane road with no paved shoulders.

I have heard that the county wants to continue reconstructing Hwy R to the south, so that it would have a non-motorized sidepath and bike lanes all the way down to Plover Rd. That would create even more quality bicycling connectivity in that area.

For now, let us celebrate the new non-motorized path and bike lanes on Hwy R between Crossroads Commons and Porter Dr. And there’s no better way to celebrate than to hop on your bike, ride over there, and discover how much more convenient it is to bicycle around that area now.

This entry was posted in All Posts, Bikey News, Infrastructure, Stevens Point Area. Bookmark the permalink.