Bike Fun Report: A recap of the 2014 Poky Pedals

Posted on October 16, 2014 by pokypedalingstevenspoint

The cool temperatures and falling leaves leave no doubt that fall has arrived. But before our thoughts turn to the winter months ahead, it is a great time to look back at the recently completed third season of Bike Fun with Poky Pedaling Stevens Point. 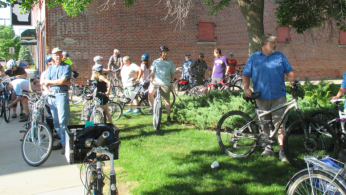 2014 was an extraordinary year for PPSP. Poky Pedalers shared Bike Fun on 13 Poky Pedals, all of which were new except for the encore Influential Citizen Ride. These averaged more than 24 Poky Pedalers each, almost double the number of Poky Pedalers per ride from PPSP’s first two years.

There is a common catchphrase about wanting to attract 8- to 80-year-olds to bicycling. PPSP did better than that, attracting 7- to 90-year-olds on Poky Pedals this year. Poky Pedalers included families with young children – some in trailers and some (as young as 7) riding their own bikes, 20-somethings, 40-somethings, 60-somethings, and – notably among the rest – a 91-year-old gentleman. One is never too old to share Bike Fun.

We rode all over Stevens Point and beyond. Our Poky Pedals took us west of the Wisconsin River and throughout the Village of Whiting. We would have ridden through Plover, but bad weather cancelled the Maple Ride (sniff). After 32 Poky Pedals over 3 years, that was the first time we had to cancel. Sad, yet we have generally been fortunate to have good weather for our Bike Fun.

The Chocolate Ride created epic Bike Fun. It was truly a Poky Pedal for the ages. (photo: Karen H.)

There were a few spectacular highlights to single out from 2014:

Beyond these notable highlights, we shared Bike Fun of several different flavors during 2014. Some of it was more historical in nature:

Other Bike Fun was educational: 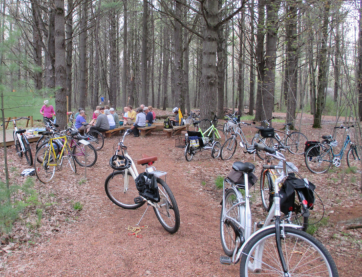 Food was another prominent theme in our Bike Fun this year. Besides Poky Pizza Pedals and the Chocolate Ride mentioned earlier, another season of monthly Poky Pedaling Potluck Picnics enabled Poky Pedalers to share delicious food contributions in splendid parks that were a 3- to 5-mile ride from our starting location. The settings for this year’s picnics included the Stevens Point Sculpture Park, a gazebo on the UWSP campus, and one of Iverson Park’s massive stone shelters. 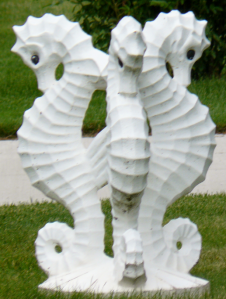 All this is merely a sampling of the immense amount of Bike Fun shared with PPSP throughout 2014. Poky Pedalers can read all the Bike Fun Reports from this year’s Poky Pedals via the links on the 2014 Bike Fun Calendar.

Turning thoughts to next year, I have already been quite active in putting together the 2015 Bike Fun Calendar. Poky Pedalers can look forward to more Poky Pizza Pedals and Poky Pedaling Potluck Picnics among next year’s Bike Fun. Other Poky Pedals will provide opportunities to learn a bit of regional history, enjoy our scenic neighborhoods, and discover the whimsical side of our urban area. There might even be a Bingo game incorporated into one of our Poky Pedals!

I am also considering a few new PPSP features for next year: a regular dessert ride of some sort and PPSP-themed bicycle “bumper” stickers. As much Bike Fun as we’ve shared in the past, we’ll be taking it to a new level next year. Hang on to your handlebars.

The 2015 Bike Fun Calendar will be available on the PPSP website in early April, the first Poky Pedal will be in mid-May, and Bike Fun will continue into the fall. In the meantime, I’ll continue to post bikey news of interest to Poky Pedalers on both the PPSP blog and Twitter feed. I hope Poky Pedalers visit the PPSP website regularly over the next several months to be reminded of all the past Bike Fun we have shared as well as to anticipate all the Bike Fun to come in 2015.