Posted on September 8, 2015 by pokypedalingstevenspoint

Earlier this evening, the Stevens Point Plan Commission deliberated on whether or not to adopt the portions of the Portage County Bicycle and Pedestrian Plan that are pertinent to the city of Stevens Point.

The full plan is a county-wide planning document that was shaped over an 18-month period spanning late 2012 to early 2014. The effort in creating the plan was guided by a collection of elected officials, municipal staff, and ordinary citizens. Guidance was provided by a team of consultants with excellent credentials and ample knowledge of current bicycling and walking trends throughout Wisconsin and the US as a whole.

The collective expertise and commitment of all these contributors led to an outstanding document that serves as a blueprint for making bicycling and walking better throughout Portage County. The plan not only makes excellent recommendations for routes and infrastructure that comprise the engineering part of better bicycling and walking, but it also provides exceptional guidance for education, encouragement, enforcement, and evaluation. 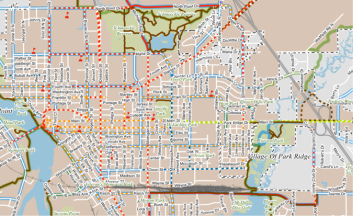 This evening, the city of Stevens Point moved one step closer towards adopting the Portage County Bicycle and Pedestrian Plan

For those less informed about such topics, the first few chapters of the plan document lay out a compelling case in plain language for making bicycling and walking better. Plan recommendations draw on these motivations for explaining the expected benefits from their implementation.

In April of 2014, the Portage County Board of Supervisors formally adopted the plan for the county by a resounding 22-1 vote.

Although the planning document addresses bicycling and walking issues throughout the county, it has substantial emphasis on the city of Stevens Point. The county generally has no jurisdiction over city streets, so adoption by the city of the relevant portions of the county-wide plan is a key step to making bicycling and walking better within the Stevens Point city limits.

At their meeting this evening, with little discussion, the Stevens Point Plan Commission voted in favor of adopting of the portions of the Portage County Bicycle and Pedestrian Plan that are pertinent to the city.

The vote this evening was merely a recommendation. The final vote for the city to adopt the plan is expected to take place at the September 21 Common Council meeting. A vote by the Common Council in favor of adopting the plan would mean that the plan becomes an official planning document for Stevens Point. At that point, it would become easier to ask the city to implement plan recommendations to improve bicycling and walking.

Adoption of the plan does not commit the city to making any expenditures. The plan is merely a blueprint so that as opportunities arise during road construction projects, coherent biking and walking networks can be created over the years to come. Some aspects of the plan, generally those that merely require paint and signage, can be implemented in the near-term at very low cost. Yet it is worth clarifying that adoption of the plan does not require the city to spend a single dime on implementation of plan recommendations.

I’ll post on this blog in order to keep Poky Pedalers informed about when and where the September Common Council meeting takes place, as well as what they decide regarding plan adoption. For more background on the Portage County Bicycle and Pedestrian Plan, including links to the plan document itself, look at this webpage or navigate there from the Speak Your Poky menu bar item.

Disclosure: Bob Fisch, Chief Bike Fun Officer of Poky Pedaling Stevens Point, was a member of the Urban Steering Committee for the Portage County Bicycle and Pedestrian Planning Project. Posts about this project appearing on the PPSP website are part of a broader PPSP effort to keep readers informed of bikey news in our area. Nothing posted on the PPSP website should be considered to be official communication from the Portage County Bicycle and Pedestrian Planning Project. The official website for this project can be accessed at http://portagecobikepedplan.wordpress.com.