Bike Fun Report: A recap of the 2015 Poky Pedals

Posted on October 7, 2015 by pokypedalingstevenspoint

This has been another spectacular year for Poky Pedaling Stevens Point. As fall starts to settle in, let us take this opportunity to look back on all the Bike Fun shared with PPSP in 2015.

This year offered 15 Poky Pedals, the most in the four years that PPSP has been creating Bike Fun, and we averaged over 12 Poky Pedalers on each. Cumulatively, our Poky Pedals covered a substantial portion of our urban area. We spanned Stevens Point from the neighborhoods west of the Wisconsin River to the commercial area along Hwy 10 east of I-39. Poky Pedalers had the opportunity to explore streets throughout the northern half of the Village of Plover on this year’s Poke Around Ride. Another Poky Pedal took us all over Crossroad Commons, where we discovered that accessing this car-oriented shopping center by bicycle can feel surprisingly comfortable, assuming a judicious choice of where one rides.

Our season of Poky Pedals had numerous highlights:

One notable new feature on each Poky Pedal this year was the availability of free vinyl bicycle stickers. These fashionable bicycle accessories give Poky Pedalers a colorful and distinctive way to express their inner Bike Fun. Two different sticker designs were handed out, plus some special limited-edition sticker prizes created exclusively for Bingo winners on the Bike to Shop Day Bingo Ride. 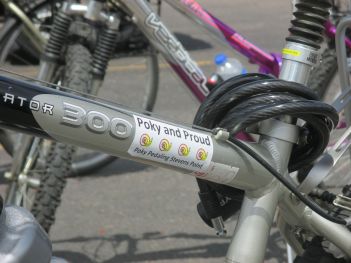 An unexpected theme this year was train blockages. Our path was blocked by trains twice on one Poky Pedal, and once again on another. Although being stuck at a train crossing can sometimes be frustrating, on a Poky Pedal they simply become another opportunity to socialize. This is a great example of the positivity of Bike Fun.

Weather proved to be a challenge this year. In May, heavy rain caused the cancellation of a TGIF Dessert Ride, only the second time in four years that a Poky Pedal was cancelled. Two other TGIF Dessert Rides encountered heavy overcast skies, sadly depriving us of beautiful sunset views. And two other Poky Pedals had weather postponements so that we could enjoy our Bike Fun in more comfortable conditions on another day. Despite our relatively cool and wet season, we were fortunate to encounter many comfortably warm and sunny days for sharing Bike Fun.

Enjoying food and beverage in the company of other Poky Pedalers was a frequent Poky Pedal theme: 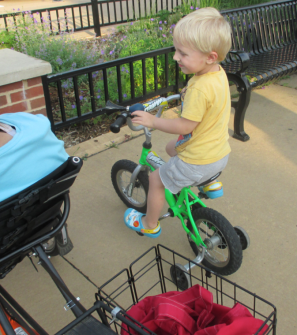 Poky Pedalers of all ages will be looking forward to sharing more Bike Fun, with or without training wheels, in 2016

This recap merely skims the surface of all the Bike Fun shared with PPSP this year. For more detail, click here to read all the Bike Fun Reports from our recently completed season of Poky Pedals.

Although the onset of chillier temperatures is imminent, every winter has its spring. I’m working on the 2016 Bike Fun Calendar, which should be available on the PPSP website in early April. Poky Pedalers can expect the usual mix of history, scenery, and whimsy to satisfy our Bike Fun cravings next year.

In the meantime, keep checking back on the PPSP website. I will continue to write about local bikey topics on the PPSP blog to keep Poky Pedalers informed about what is happening to make bicycling better in the Stevens Point area.

I look forward to once again sharing Bike Fun with all Poky Pedalers in 2016.