Report from the October 2015 Bicycle and Pedestrian Advisory Committee meeting

Posted on October 21, 2015 by pokypedalingstevenspoint

Here are highlights from the discussions held during the meeting. 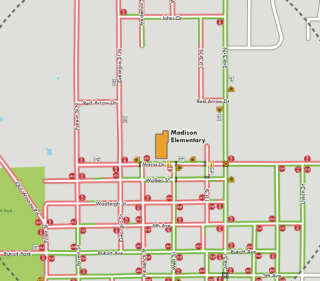 Sidewalk audit from the Portage County Bicycle and Pedestrian Plan for the neighborhood around Madison Elementary School. Red lines bordering streets are missing sidewalks. The plan identifies lack of sidewalks as a limiting factor for safe and comfortable walking routes to Madison.

Sidewalk gaps near elementary schools
Over the course of the meeting, one of the recurring themes brought up by both committee members and community members is the need to fill gaps in the sidewalk network in various parts of the city. Three specific areas mentioned were the neighborhoods surrounding three Stevens Point elementary schools: Bannach Elementary School on the east side of I-39 north of the shopping area that includes Target, Madison Elementary School north of downtown just west of Second, and Washington Elementary School on the corner of Prais and Wilshire just north of the Copps grocery store.

Recently, District 7 Alderperson Mary Kneebone held a public forum where there was discussion about the lack of sidewalks near Bannach. An attendee of today’s meeting asked the BPAC to contact Ald Kneebone to find out what came out of that discussion.

Another attendee of the BPAC meeting, District 4 Alderperson Heidi Oberstadt, announced that there will be an upcoming meeting at Madison to discuss sidewalk gaps near that school. That meeting is tentatively set for the second week of November – more information on that meeting will become available once the specific date is confirmed.

The Portage County Bicycle and Pedestrian Plan, recently adopted by the City of Stevens Point, has a 200-page appendix on Safe Routes to School that includes recommendations for every K-12 school, both public and private, in Portage County. For each school, a survey of the surrounding neighborhoods was made to identify existing infrastructure, and recommendations for adding sidewalks are among the improvements suggested for each school. With regard to the three schools discussed at today’s BPAC meeting, the plan document is an excellent resource to start the conversation about filling gaps in the sidewalk network.

There was no specific proposal regarding sidewalk gaps to act upon at today’s meeting, but the tone of the conversation suggested that the BPAC might take some future action to encourage the city to add sidewalks in these areas.

Process for adding bike lanes
The bike/ped plan includes a list of recommendations for bike lanes in Stevens Point. The BPAC will need to go through this list in order to help the city decide which recommendations to implement.

Dir Schatschneider commented that Stevens Point does not have resources for marking an extensive list of bike lanes. The city’s ability to create pavement markings is limited by their available staff and equipment. Thus, the city would need to hire a contractor for the striping of bike lanes. He suggested that the BPAC act to recommend an allocation for this expense in the 2017 city budget.

A proposal was made to ask the Stevens Point Plan Commission if they approve of the idea of hiring a consultant for painting bike lanes as part of the 2017 budget. It makes sense to learn of the city’s support for this idea before putting significant effort into identifying the preferred bike lanes. The BPAC voted in favor of bringing this issue to the Plan Commission at their December meeting.

Commenters generally felt that it was premature to create any such ordinance for Stevens Point because there are too many locations where bicycling in the roadway is intimidating to a large share of those who bicycle. Without adequate bicycle infrastructure, the sidewalk is often the only option that feels safe. Education was commonly suggested as a better alternative to creating an ordinance.

Part of the discussion focused specifically on Main St downtown and whether a sidewalk bicycling ban limited to a few blocks east of the public square might be appropriate. A comment indicated that business owners in this area have concerns about potential collisions between people bicycling and people exiting their storefronts.

No action on this item was taken by the BPAC.

For this reason, the BPAC proposed an ordinance that would create a mechanism for identifying abandoned bicycles. This ordinance, based on an ordinance from Madison, would allow a city agent, such as a police officer, to tag a bicycle that appears to have been abandoned. After being tagged, the owner of the bicycle would have 72 hours to notify the city that the bicycle is not abandoned. The BPAC voted to recommend this proposed ordinance to the Plan Commission.

BPAC aims to help the city implement an effective integrated multimodal transportation network. Improving biking and walking infrastructure and policy will benefit our economy, the environment, and make Stevens Point a healthier and more attractive community for people to live, work, and visit. To achieve this goal, BPAC will focus on implementing the Portage County Bicycle and Pedestrian Plan; promote transportation equity; coordinate safety education for cyclists, motorists, and pedestrians; promote safe routes to schools; improve transportation accessibility; and seek funding opportunities to support these goals.

Next meeting
The next meeting of the BPAC was scheduled for Tuesday November 17 at 10 AM in the City Conference Room of the County-City Building (1515 Strongs Ave).

I intend to be at the November BPAC meeting and to post a report on the PPSP blog describing what takes place.

This entry was posted in All Posts, Bikey News, Stevens Point Area. Bookmark the permalink.