Posted on February 21, 2016 by pokypedalingstevenspoint

It has been over a year-and-a-half since I last wrote about the Hoover Ave railroad grade-separation project. Since that time, Stevens Point officials have taken a few notable actions pertaining to bicycle access as part of this project. Unfortunately, life got in the way, and I didn’t post about these on the PPSP blog. Now, I would like to summarize what has happened since my posts (here and here) in May 2014.

As I mentioned in those posts, there were several design options being considered to eliminate the Hoover at-grade crossing of the railroad. In the months that followed, the city chose to move forward with the sloped-wall overpass option. Their choice of this option was expected. 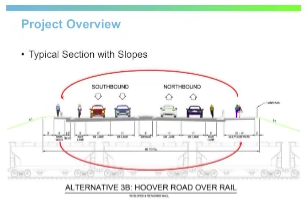 This slide from the March 2015 Public Works presentation illustrates the design change moving the multi-use path to the west side of the overpass, thus aligning with the existing MUP along Hoover south of Industrial Park Dr

This design change maintains the possibility of someday having a comfortable 5.3-mile connection along Hoover from Main St to the Pacawa Park area in Plover. Once the overpass is built, the only missing section would be the half-mile portion north of the overpass along Country Club Dr that would connect to the existing MUP along the south side of Main St. As a result of this design change, people bicycling and walking will not need to cross Hoover, a busy and fast-moving 4-lane roadway, to travel north or south along the length of this MUP. This design change is excellent news indeed.

I could not locate a copy of the presentation slides from this March 2015 meeting on the Stevens Point website. However, the city’s video of that Board of Public Works meeting can be found here. Agenda item 8 is the presentation, and the video for this agenda item shows the slides being presented at the meeting. You can skip directly to that portion of the video by clicking on agenda item 8 below the viewer.

Since that March 2015 meeting, most of the focus on this project has shifted from the overpass itself to access to the industrial park east of Hoover just south of the overpass. Because Joerns Dr will no longer extend to Hoover once the overpass is built, project staff has been evaluating the need to enhance the intersection of Hoover and Coye Dr, as well as the need to extend Heffron St to create a second entrance to the industrial park. Aside from bike lanes shown as part of the enhancements in the proposed designs, the impact to bicycling from the proposed changes for industrial park access is negligible.

Bicycle access to Joerns Dr (and the I-39 underpass immediately to the east) from Industrial Park Dr will be similar to what it is today, requiring an unpleasant crossing of Hoover to access a MUP north of the Delta Dental building that will lead to Joerns.

Several Public Works meetings have discussed the options for updated access to the industrial park. These discussions have sometimes been contentious due to their impacts on neighboring landowners. At the January 2016 Public Works meeting, a final design for the Hoover/Coye intersection was agreed upon. It was also agreed to delay building any extension to Heffron St, meaning that the industrial park will only have one roadway for motor vehicle access. The January 2016 Common Council meeting confirmed this decision. As part of this decision, the MUP to access Joerns from Hoover will be built to enable emergency vehicles to access the industrial park in the event Coye is not passable.

Project staff demonstrated that there is enough space to create a multi-use path under the overpass so that a ramp down the west side of the structure could connect to Joerns Dr on the east. Project staff chose not to implement such a path.

I want to end by discussing a huge missed opportunity for improved bicycle access on this project. In comments I sent to project staff in May 2014, I suggested an option for biking and walking access from the west side of Hoover to Joerns Dr that would pass under the overpass next to the railroad tracks, thus eliminating the need for those traveling east or west to cross Hoover.

I heard no reaction to this idea until the July 20, 2015 Common Council meeting. At that meeting, project staff gave a presentation focused on this and a couple of other ideas for the overpass. Part of that presentation showed that building a MUP that ran under the overpass was technically feasible. However, the main message from that presentation was that at that late stage of the project, when the 60% design was complete, making a change to create a MUP running under the overpass would be too costly and would create project delays that could jeopardize funding from state and federal sources. Faced with this assessment, the project moved forward with no change to its 60% design.

At this same Common Council meeting, there was some discussion of improving the crossing of Hoover between Industrial Park Dr and the MUP to Joerns via some sort of foot-traffic-activated signaling. However, I have yet to see or hear anything from the city demonstrating a firm commitment to the installation of any such crossing infrastructure at this location.

This brings us up-to-date on how decisions made for the Hoover overpass project since May 2014 have impacted bicycling. The switch of the MUP along Hoover to the west side of the overpass is wonderful news, but this is offset by the missed opportunity to create a MUP under the overpass, which would have eliminated the need to cross Hoover at all for most bicycling and walking traffic.

If any future project design changes impact bicycling, I’ll post such news on the PPSP blog. Otherwise, Poky Pedalers will simply have to wait until construction is finished in late 2017 to take advantage of the bicycle infrastructure on the Hoover railroad overpass.