Posted on May 11, 2016 by pokypedalingstevenspoint

[Update May 12: I received communication from Trustee Bill Taugner that the May 24 public hearing will take place at 5:30 PM. This is a half-hour earlier than the time I speculated in the original post. I have edited this post to reflect this updated information.]

Last night, the Whiting Village Board of Trustees considered the issue of adopting the Portage County Bicycle and Pedestrian Plan. Two weeks ago, the Whiting Public Works & Parks Committee voted 4-1 in favor of recommending adoption of the plan. Approval by the Village Board would mean that it would become an official planning document for Whiting.

The discussion on this issue started with statements by three audience members. Two spoke in favor of adopting the plan and one spoke against.

One of those speaking in favor, Susan Lasecki, focused her comments on the plan recommendation for a road diet on McDill Ave, also known as County HH. My post on the recent PW&P Committee meeting explains how the issues of adopting the bike/ped plan and implementing a road diet on McDill/HH are intertwined. The proposed road diet would restripe from the current four standard travel lanes on McDill/HH – two in each direction – to a configuration with one standard travel lane in each direction, a central two-way-left-turn-lane, and outer bike lanes.

Lasecki summarized many of the benefits of a McDill/HH road diet: traffic speed reduction, improved crossings for people bicycling and walking at two key locations, noise reduction for residents along the street, and better bicycle access along HH. She also brought copies of a petition demonstrating support for a McDill/HH road diet by over 100 people.

The audience member who spoke against adoption of the plan (I did not get her name) stated that she did not believe that a road diet on McDill/HH would reduce traffic speeds. She was also concerned about costs to the village if it adopted the plan. 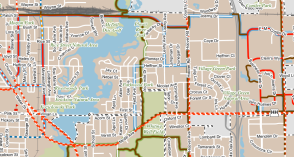 Village President Paul Stroik and Trustee Bill Taugner each pointed out that adoption of the plan did not obligate the village to implement any of its recommendations. The opportunity to implement a road diet is arising due to a resurfacing project by Portage County. The cost of striping McDill/HH – whatever the striping pattern might be – is part of the overall project cost for the county. Adoption of the bike/ped plan by Whiting does not come with any commitment by the village to make any specific expenditure.

Trustee Bill Horvath stated that he has lived on McDill/HH since 1986. His comments downplayed the affect of traffic noise and speeds on quality of life issues for residents along McDill. He clearly stated that he is adamantly opposed to a road diet for McDill/HH because such an implementation would cause problems. 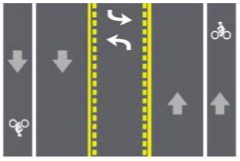 A generic illustration of the restriping of McDill Ave if Portage County were to approve a road diet configuration (image credit: Susan Lasecki)

President Stroik mentioned there would be a public hearing during the Public Works & Parks Committee meeting on May 24 to give the public an opportunity to express their opinions about a McDill/HH road diet. Letters would be sent to those who live along McDill/HH in Whiting to ensure they are aware of this opportunity to state their striping configuration preferences for the street they live on.

Trustee Bill Taugner questioned whether it might be wise to postpone a vote on adopting the bike/ped plan for the village until after the public has its say on McDill/HH. Trustee Horvath moved to postpone the vote on the bike/ped plan until a later time, and Trustee Cecil Coats seconded. On a voice vote, all but one trustee voted in favor of postponing the vote.

What comes next?
As I explained in my post from the recent PW&P Committee meeting, any decision by Whiting on whether or not to implement a road diet on McDill/HH is simply advisory. Portage County has the final say because it is a county road. However, the mood of the residents of Whiting, particularly those who live along McDill/HH, regarding the implementation of a road diet could have significant influence on county decision-makers.

Although village adoption of the bike/ped plan is a separate issue, the framing of the discussion by Whiting officials seems to have made the issue of plan adoption a proxy for approval of a road diet for McDill/HH.

The consequence is that the May 24 public hearing during the Whiting PW&P Committee meeting is likely to dictate how the village moves forward on the interrelated issues of the bike/ped plan and the road diet.

This public hearing is also likely to be the best opportunity for Portage County officials to hear directly from the residents of Whiting in advance of any decision that might come before their committees on how to configure McDill/HH at the completion of their resurfacing project.

The jurisdictional politics at play are somewhat complex. Even though the May 24 event is a Village of Whiting public hearing, it is important for residents throughout the county to attend this meeting. The opinions of residents of Whiting are likely to have more impact than those who live in other municipalities, yet the expression of all opinions on these issues will have influence. Since the county will make the ultimate decision on how McDill/HH will be striped, county officials at the meeting should have interest in the opinions of residents throughout Portage County on this matter.

Therefore, anyone interested in expressing their opinion about either implementing a road diet on McDill/HH or Whiting’s adoption of the bike/ped plan should plan to attend that May 24 meeting. I have gotten communication from the chair of the PW&P Committee, Trustee Bill Taugner, that the public hearing will take place at 5:30 PM in the Whiting Municipal Center (3600 Water St in Whiting). Links to agendas for Whiting meetings are posted to this village webpage, so this would be a good place to look for official confirmation of the time and place for the PW&P Committee meeting – look for the table labeled ‘Public Works’ – a few days in advance.